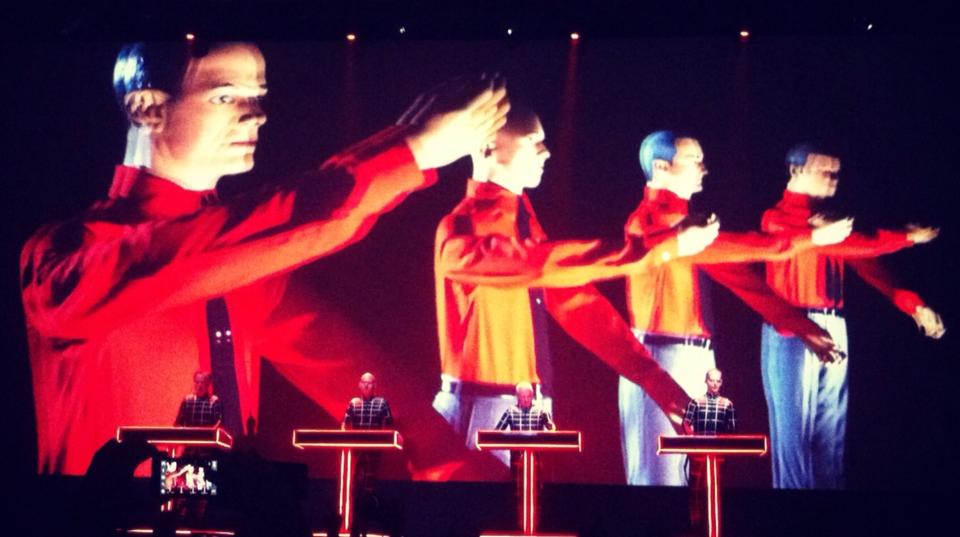 The concert ended, and I wondered: what if I leave now? Of course! I had just finished one of the greatest moments of my life and anything that could happen thereafter, including an unexpected pornographic one night stand, could spoil the mouth taste that I had achieved. However, at the same time, I wondered: maybe I could stay in the festival and make profitable the Sònar’s ticket price by listening to more groups. This, even though (I repeat), it seemed better for me sleeping soberly and with a wide smile in my face.

Paying 70 euros for a concert, even if it had become “the one of my life,” was a thought that maybe could not leave me alone for the rest of the night, a tortuous idea that could precisely finally destroy my sacred mouth taste. I wanted to consume fine; to make it everything really worthy. The fact is that I stayed, but I was too stunned… In an enough way for, hours later, suffering a slight mental imbalance that I handled with what the old people say to theirself: “It will pass, it will pass.”

I managed to be in the front row thanks to those who were before me did not endure Raime’s proposed equalization with subwoofers at a ground level and just six feet away from the public: the British chose to shake the bowels of the people who were closer to the stage. And without pause: prrr… Thus, for 40 minutes. A pity, because a so valuable music with great evocative power through dark atmospheres disappeared for completely. Just in case, I put toilet paper plugs in my ears because I lost confidence in the intentions of Tom Halstead and Joe Andrews: it was evident that they gave a damn about my hearing health (and the same with the rest of the public). 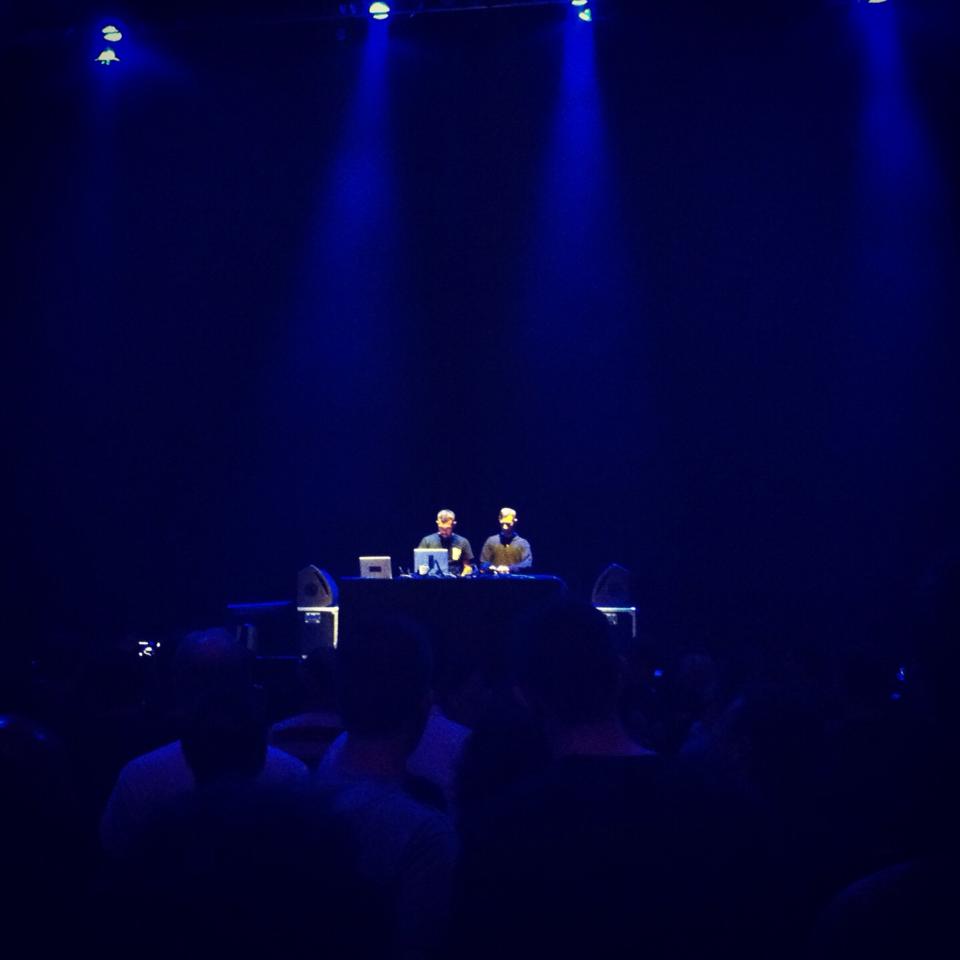 Finally. They were scheduled for 10 p.m., early. Why? Most of the people who were in the first row played near the fourth base. I can say even I felt young there (a miracle, as things are lately). I decided to remove my toilet paper plugs because I thought that the almost 70 years old members of Kraftwerk were not interested in playing loudly but perfect and that if they would remove my guts, they would do it in the necessary times and not always… And I was right: no “tiii” in my ears the next day.

Once started, the mixture of historical moment, of Roman heroes walking around the square after the great victory, and the intention of thanking them “personally” for what they’ve done for music, among many other things, made me forget that the boy who shared with me the first row in my left, had an armpit that smelled like a dirty monkey. But why my shock with Kraftwerk? I will rehearse an explanation which is not a secret: in art, everything is about creating a universe. It can be of 50 cm. X 50 cm., of 10 pages or three minutes. Sometimes, this universe may be the result of a strong personality, the chance of a context, a carefully prepared plan or all three at once. Kraftwerk, however, is that: a universe. The Germans not only offer songs but the possibility of entering a parallel reality, for travelling to another world. The effect is similar to what might make a good film in a movie theater, but away from narrative rationality: this is music… linked to the unconscious reality (as well a delicious scratch in the back, but with many more complex neuronal effects).

I will not repeat here what is already known about the group, the concepts that serve it as raw material and how it masterfully merges with their music. A proposal that, as everybody should know, is forever stamped in contemporary music produced in cities with Western influence. That is why I prefer to go on detailing my personal experience which, even trivial, at least is not in the Wikipedia. 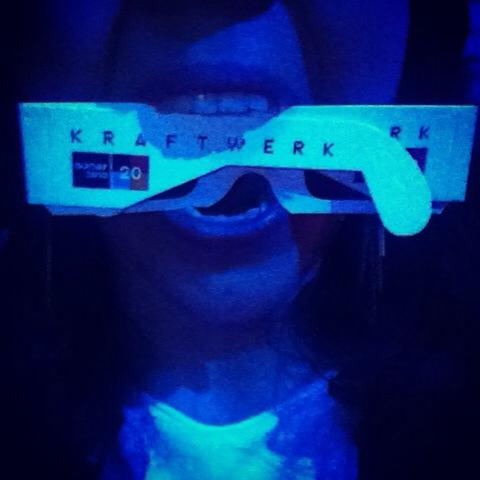 Why did I decide to go their concert just as I knew they would play in Barcelona? Let’s see, after what I already said, I only need to add that I find Kraftwerk most important than The Beatles. The problem was that they would be playing in Sònar, a festival that I find it hard to process because as they invite great musicians, among them are included a large percentage of DJ’s (I’m not with the DJ marketing ‘culture’), and it takes place in a space that makes me feel a prisoner. Also, being among so many people who are there only to party and not for the music, produces me stunning (everyone is free to do what they want, but in that case I prefer a disco or a terrace, where the music and the means by which it is played are exactly the same). Sure, you can think about the festival as the “party of the year” or something like that, but I am part of the gang that gets frightened by these rituals and avoids them. (Note: there are people who go only for the music, as a former audio teacher, but they are ‘rare avis’ in that fauna).

I then decided to enforce the price of my ticket to the festival, and identified the performances that could make me divide the price by seven making every concert cost me just ten euros. My list was: Raime (22h), Kraftwerk (22:45 h), Nicolas Jaar (just 15 minutes as he crossed with Kraftwerk), Two Door Cinema Club (1:30 pm), C2C (2h), San Proper (3:30 am) and hesitate between a kick in the balls or a finger in my ass: Skrillex or Karenn (4:15 h).

It can be said that I experienced, so far, the closest virtual reality ever (a project that was started with the “official” invention of perspective 500 years ago with the Renaissance painters). The parallel reality I lived, as I said, was not only due to 3D technology that was used, precisely, to intensify the conceptual weight of the Germans (I think it was a wise move putting into stage the video-operator Grieffenhage Falk, as part of the “musicians”; a symbol of changing times in music and, at the same time, of what has always meant to go on stage: paying attention to the staging).

When the concert ended, very clumsily, I retired from the front row while a large number of children was pushing me to break through and see the next group (they were more interested in it). I moved without thinking clearly, not knowing what was going on, how I had finished going to the Sònar and that stuff… I wandered like a lost soul on the stages, and all performances sounded me the same. I saw people with their eyes closed in ecstasy, and I was feeling like a fool. I sent some SMS and a friend came in my rescue. We danced a while there, but I lost him because he was looking for the bass frequencies while I retreated to the background, trying to kill some time to assert my ticket until I realized the absurdity of my plan. I had to leave. I made sure I had not lost my 3D glasses, where it says “Kraftwerk” on the sides, and then retired at 3 a.m. using Barcelona’s nitbus services, where I met a very nice girl who also could not endure the Sònar. Now I have her phone number. 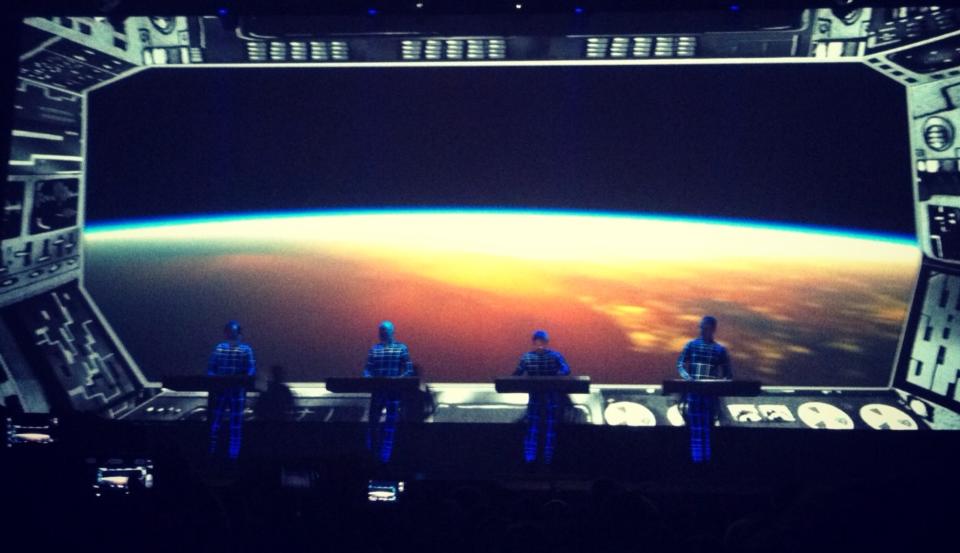 I went to bed happily; all the “postkraftwerk” failed to take of my good mouth taste… but I woke up in the middle of my dreams with the horrible feeling that it was better virtual reality than natural reality, with the anguish of not being able of removing from my mind that idea, and feeling a temporary state of disequilibrium. I was longing to follow in the virtual insanity of Kraftwerk, in their universe! I tried several things to take away that feeling: being aware of the beatings of my heart, thinking of a good body… but nothing. I was like crazy until I finally felt the bedclothes on my feet, my cheeks rubbing with the pillow while I said to myself “this is good”; finally reconciling with the ‘real reality’. A future dilemma … Kraftwerk made me enjoy (and suffer) the future.